Here is the next installment of "Book Briefs," the series of occasional posts featuring short first-hand descriptions of some of the numerous books that publishers send to me for consideration on this blog. Obviously, these briefs are not full-blown reviews, but they are a way to share more books worthy of attention than those that end up as long reviews. 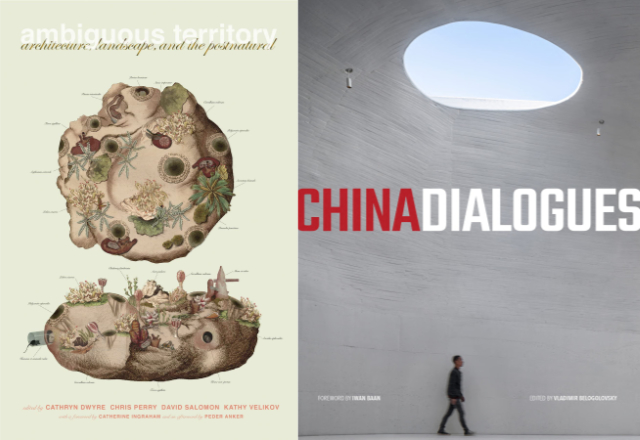 Ambiguous Territory: Architecture, Landscape and the Postnatural edited by Cathryn Dwyre, Chris Perry, David Salomon, Kathy Velikov | Actar Publishers | August 2022 | 6-1/2 x 10 inches | 320 pages | $39.95 | Amazon / Bookshop
Ambiguous Territory began as a symposium and exhibition at the University of Michigan Taubman College of Architecture and Urban Planning in fall 2017, with the exhibition traveling to three other schools of architecture in Virginia and New York over the next two years. The Ambiguous Territory book features the 40-plus projects from the exhibition as well as close to a dozen essays, all organized into three sections "or relationalities to the ground": the Atmospheric, the Biologic, and the Geologic. The three-part project (symposium/exhibition/book) "aims to explore [the] potential of converting the effects of anthropogenic climate change into an imaginative resource for creative practice through the process of aesthetic thinking." The cover, Terra Sigillata by pneumastudio (the studio of Cathryn Dwyre and Chris Perry, two of the project's curators/editors), is one such creative response. It is accompanied by projects by studios with names that should be familiar to people paying attention to young architects and designers these days (see also: Possible Mediums): Bittertang Farm, Terreform ONE, Ellie Abrons, formlessfinder, Smout Allen, DESIGN EARTH, etc.

China Dialogues by Vladimir Belogolovsky | ORO Editions | March 2021 | 7 x 9 inches | 250 pages | $24.95 | Amazon / Bookshop
Uber-interviewer Vladimir Belogolovsky has compiled 21 conversations he conducted with 25 Chinese architects over a three-and-half-year period. The interviews began in spring 2017, when he was traveling to China as a curator and speaker, overlapped with a semester teaching at Tsinghua University in Beijing (his first-ever teaching gig), and continued into the early months of the pandemic, when WeChat video calls replaced in-person visits. The architects in the talks are stellar: Wang Shu and Lu Wenyu of Amateur Architecture Studio, Ma Yansong of MAD Architects, Dong Gong of Vector Architects, and Li Xinggang, Li Xiaodong, Lyndon Neri and Rossana Hu, and Zhu Pei of their respective eponymous studios, among others. Although the interviews were first published at ArchDaily, Stir, and other venues, both digital and print, here they are presented in their full versions, accompanied by many photographs, some of them by Iwan Baan, whose introduction recounts his years working in China that started with documentation of the construction of OMA's CCTV Headquarters. Belogolovsky's own, considerably longer, introduction, situates the 21 Chinese studios within a longer architectural context and conveying how the architects he selected "bring a healthy distraction and diversity into China's current architectural development to keep it dynamic and nonformulaic." 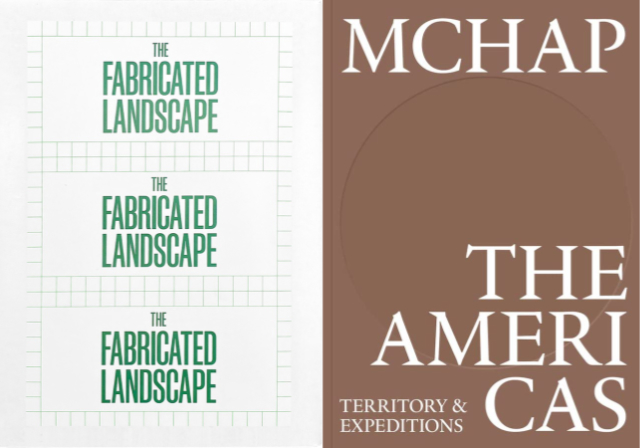 The Fabricated Landscape: Domestic, Civic, and Territorial edited by Raymund Ryan | Carnegie Museum of Art/Inventory Press| June 2021 | 6x9/12x9/12x18 inches | 64/32/16 pages | $20
Mose exhibition catalogs adhere to a conventional format: color plates of the works on display in the exhibition accompanied by scholarly texts related to the exhibition's theme or subject, the first usually following the second. Although the catalog accompanying The Fabricated Landscape (Carnegie Museum, June 2021 to January 2022) consists of these two general pieces, it puts them into three stapled booklets that range in size from small to large, book-size to poster-size. This format echoes the theme of the exhibition, which presented the work of architects whose "smallest and most intimate of projects," according to curator Raymund Ryan, are "connected to a vision of far more extensive landscapes and infrastructures." Accordingly, small projects (e.g., Anna Heringer's Cathedral Altar) are found in the first, "Domestic" volume; larger public projects (Assemble's Goldsmiths Centre for Contemporary Art) are in the second, "Civic" volume; and projects that address even larger landscapes (SO–IL's Las Americas Social Housing) are in the third, "Territorial" volume. The projects are interspersed with texts by the participating architects and other contributors, including three "fables" by Emilio Ambasz. Most of the catalogs in my library are for exhibitions I've seen in person, functioning best as reminders of my visits. But for those which I haven't been to, the best catalogs make me wish I had seen them in person — this one included. (The catalog can be purchased via Inventory Press.)
MCHAP The Americas 2: Territory & Expeditions edited by Florencia Rodríguez | Actar Publishers/Lots of Architecture Publishers/IITAC Press | May 2022 | 6-3/4 x 9-1/2 inches | 296 pages | $49.95 | Amazon / Bookshop
It's been six long years since the winner of the second iteration of the biennial Mies Crown Hall Americas Prize (MCHAP) was announced, and five years since the release of the book covering the inaugural MCHAP from 2014. The current year sees the process of the fourth MCHAP far underway, with the MCHAP.emerge winner named just last week and the overall winner to follow in April 2023. A delay of this length — whatever its reasons, Covid and/or otherwise — would normally make such a publication irrelevant, especially with today's fast-paced online coverage of architecture. But like its predecessor, MCHAP The Americas 2 benefits from the original contributions that accompany the presentation of the winner and the finalists. Standouts include an essay by Patricio del Real addressing MoMA's role in shaping notions of Latin American architecture, Enrique Ramirez's intellectual wanderings across real and imagined landscapes, and Sol Camacho's argument for "the value of voids, passageways, and other non-functional spaces in cities and buildings." There are also visual essays aligned with the book's theme of "territory and expeditions" and a number of conversations and email transcripts at the back of the book that "add voices to the critical thinking of architecture, planetary culture, and nature, among other issues." Still, the bulk of the book is taken up by documentation of the MCHAP 2 winner (Grace Farms by SANAA) and the five other finalists; those interested in the MCHAP.emerge winner (PRODUCTORA's Pavilion on the Zocalo) should check out Being the Mountain, published on a more timely basis, in 2020. 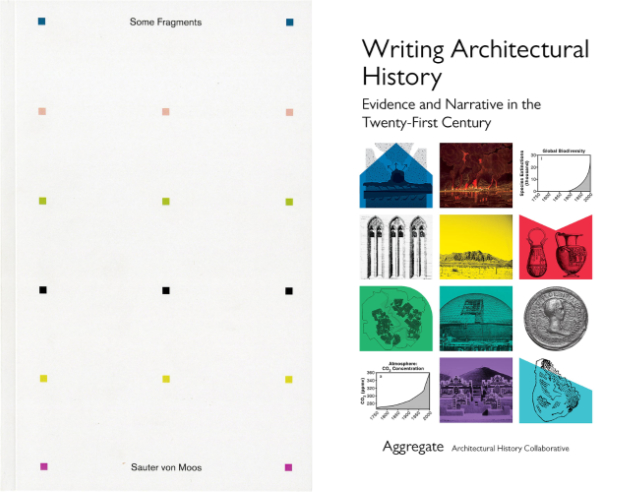 Sauter von Moos: Some Fragments edited by Sauter von Moos (Florian Sauter and Charlotte von Moos) | Verlag der Buchhandlung Franz und Walther König | March 2022 | 5 x 7-3/4 inches | 108 pages | 18€ | Amazon / Bookshop
Florian Sauter and Charlotte von Moos describe themselves as "two middle-aged architects who have built a series of houses, exhibited internationally, taught on both sides of the Atlantic, and published a few books on architecture." One of the last is the wonderful In Miami In The 80s: The Vanishing Architecture of a "Paradise Lost", published earlier this year. Considerably slimmer is the book accompanying the exhibition also called Some Fragments, which was displayed at the Museum in Bellpark Kriens in the spring of 2022. Compared to the laser-focused In Miami In The 80s, Some Fragments is, like the name says, made up of some fragments: statements about architecture and its contexts; images of Sauter von Moos's houses and projects; and snippets from literature. Six thematic chapters (Presence, Surrealism, Archaism, Freedom, Loss, Space-Time) serve as armatures for numbered statement — 300 of them, 50 per chapter. They range from the pithy ("The next building is always the best one") and enigmatic ("Novelty is the oldest thing on earth") to the obvious ("There are no good projects without good clients") as well as the unexpected ("Have you ever noticed that natural light is for free?"). Most of the statements are considerably longer than these short examples, and as such are generally more complex in nature. Overall the statements express how Sauter and von Moos theorize architecture, though they also manage to capture the mindset of most architects at this point in time.
Writing Architectural History: Evidence and Narrative in the Twenty-First Century edited by Aggregate Architectural History Collective | University of Pittsburgh Press | December 2021 | 6 x 9 inches | 360 pages | $65 | Amazon / Bookshop
Writing Architectural History is the second book by Aggregate Architectural History Collective, arriving about a decade after Governing by Design: Architecture, Economy, and Politics in the Twentieth Century. (Earlier this year the group's third book, Architecture in Development: Systems and the Emergence of the Global South, was also published.) While the first "disputes the primacy placed on individuals in the design and planning process and instead looks to the larger influences of politics, culture, economics, and globalization," the second book looks at evidence and narrative as means of writing "today's counternarratives in architectural history." It is a timely book, coinciding with such revisionist histories as Race and Modern Architecture, also published by University of Pittsburgh Press. This, too, is a diverse book, with the twenty contributions covering a wide territory, from Baghdad to Haiti and from Medieval times to the Anthropocene. Essays standing out to this reader are: "Known Unknowns: The Documentary History of the Franklin Ghost House" (yes, that VSBA project) by Edward Eigen; "The Banister Fletchers' Tabulations" by Zeynep Çelik Alexander and Michael Osman; "Forensic Architecture as Symptom" by Andrew Herscher; and "Learning from Johannesburg: Unpacking Denise Scott Brown's South African View of Las Vegas" by Ayala Levin.
Email Post
Labels: book-briefs