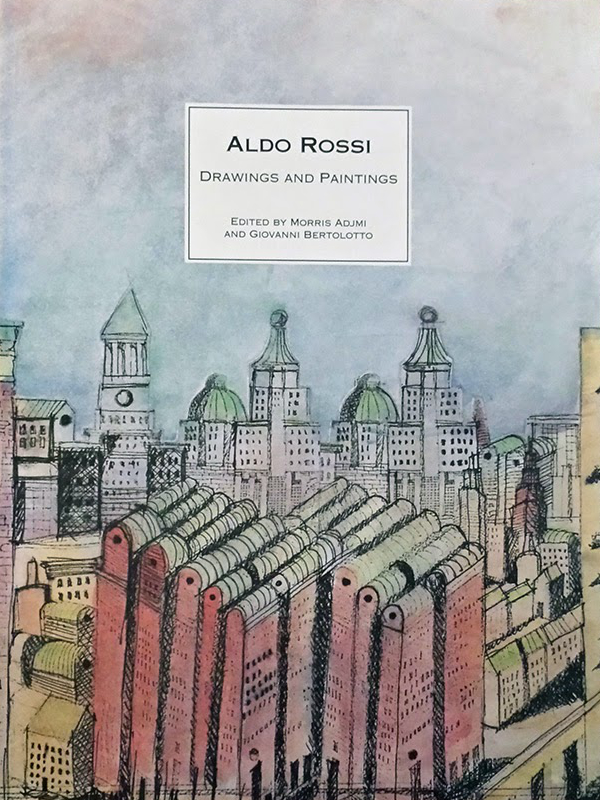 PUBLISHER'S DESCRIPTION:
Aldo Rossi is admired as much for his artistic ability as for his architectural design skill. His drawings, paintings, and renderings have been exhibited in museums and galleries from New York to Moscow, and formed the basis of a 1991 retrospective at the Pompidou Center in Paris.
This elegant book collects over 200 color reproductions and 200 black and white reproductions of his drawings and paintings together in a companion volume to Aldo Rossi: Architecture 1981-1991. An introduction by the editors explores the themes common to Rossi's architectural and drawn oeuvre, and an essay by critic and art historian Carter Ratcliff situates Rossi's graphic work in the context of contemporary art.
REFERRAL LINKS:

dDAB COMMENTARY:
Reviewing two books about drawing this week — one of them with a short essay on an Aldo Rossi drawing — plus two books about architectural typologies over the last two weeks, led me to pull this book of the famous Italian architect's drawings and paintings off my shelf. If any architect is associated with typology, it's Aldo Rossi, author of The Architecture of the City, the 1966 book that proposed an understanding of the city as a taxonomy of architectural typologies. Rossi would have turned 90 this coming May if he had not died in a car accident in 1997. His built output was substantial but much less than it should have been; in turn, I think he will be remembered in the long term more for his writings and drawings than his buildings. Go figure that when I bought this book at Prairie Avenue Bookshop decades ago I didn't bother with the companion volume, mentioned above, that focuses on the buildings. Five years ago, probably the last time I browsed the book, I wrote the following words about Drawings and Paintings on my Unpacking My Library blog:
"Aldo Rossi is one of those architects whose drawings and writings made more of an impression on me than his buildings. During a semester in Italy I was able to visit a couple of his projects, but I found them lacking – the austere and repetitive volumes and surfaces of the cemetery in Modena made some sense for a 'city of the dead,' but the barren public spaces next to his building in Perugia seemed to be a product of his architectural choices. Whatever the case, his drawings have a richness – of line, surface and color – that his buildings [only] hint at. What is appealing about his drawings is how they mix the architectural and the personal; the former in the subjects of buildings and cities, and the latter in the mix of other things (coffee pots, cabanas, hands, statues, etc.) and the almost child-like quality of the drawings. If I drew like Rossi in architecture school I would have been reprimanded for 'floating,' where the drawing's point of view is higher than in reality (the cover's barrel-vaulted roofs are a good indication of this). Ultimately the drawings (so many of them!) are evidence of the act's importance in the architectural process, be it as a design tool or just a daily ritual."
There are just over 200 drawings and paintings in the book, presented in ten thematic chapters that follow a preface by the editors and an essay by Carter Ratcliff. The chapters group Rossi's distinctive drawings and paintings by subject (Urban Landscapes, Natura Morta, Marine Constructions) or feature (Windows, La Mano del Santo) or some other characteristic. A couple chapters focus on animals (Anatomy of the Horse and Dogs and Some of My Other Friends, the second in the spreads below), clearly a product of the personal nature of Rossi's drawings and the way they functioned as daily acts, not just design explorations. Grouping the drawings and paintings into the thematic chapters results in a fair amount of repetition, which will be welcome to fans of Rossi but off-putting for those who don't get the appeal. Following the chapters is a chronology of the drawings and paintings with all 203 of them repeated, but smaller and in b/w. This section reveals the evolution of Rossi's hand, which were thick and painterly as a youngster but show a remarkable consistency from the early 1970s to the early 1990s, when the book was published. If you're a fan of Aldo Rossi — you know who you are! — this is definitely a book you should own.
SPREADS: 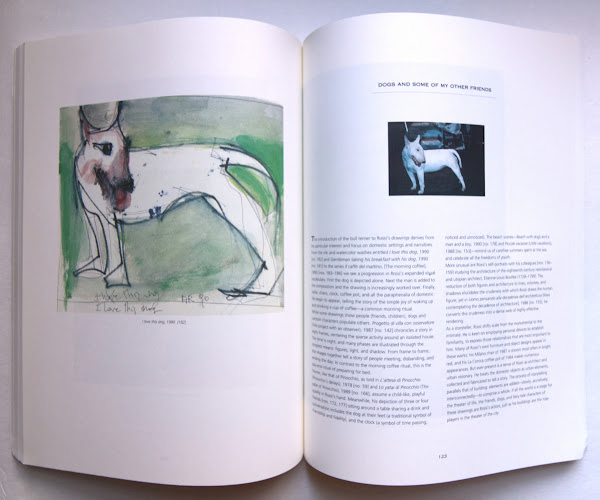 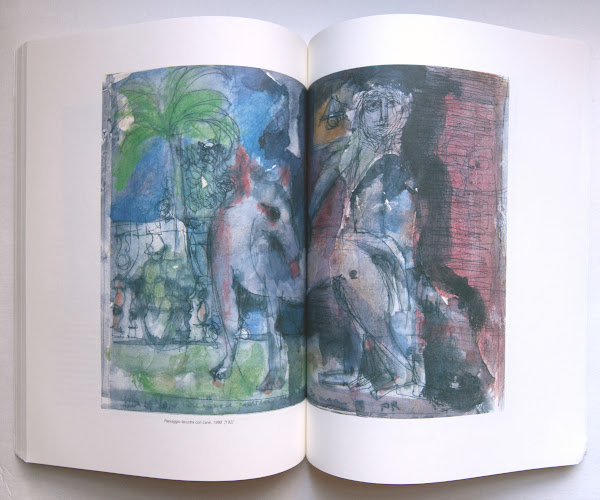 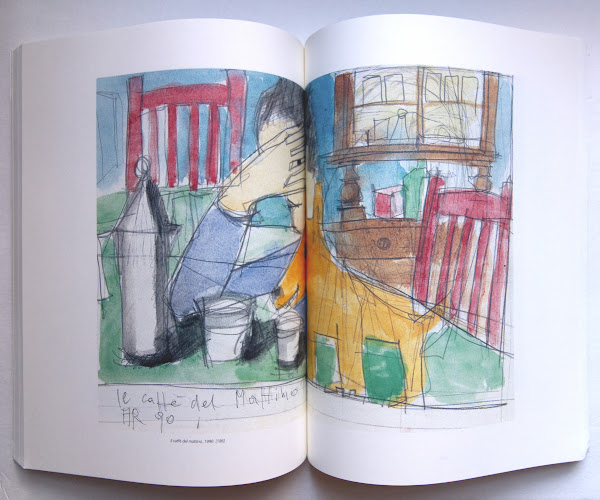 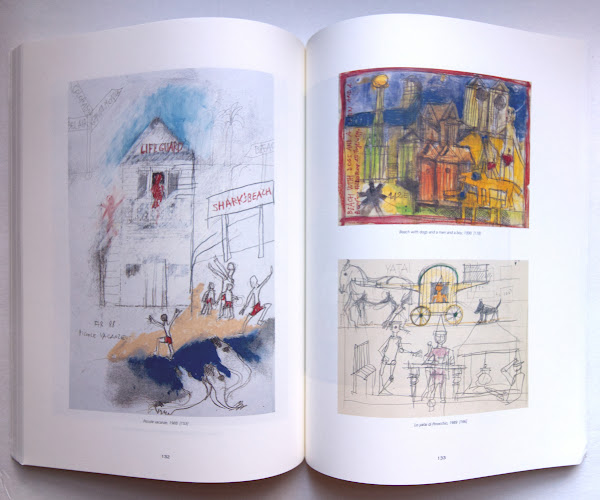