The following images and text are by Finnish architects Mikko Heikkinen and Markku Komonen, aka Heikkinen-Komonen Architects. 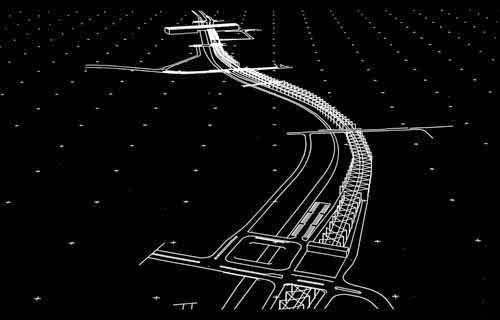 The Vuosaari area of Helsinki starts at Vartionkylänlahti, where the semi-motorway Vuotie together with the metro track running above ground cuts an almost 100 m wide canyon in the landscape. This traffic environment forms the main entrance to the most vigorously growing part of Helsinki, and maybe some day it will act as passage to the new Finnish giant harbor. 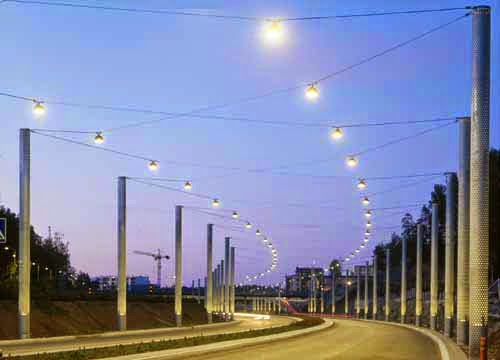 The expanse of the area and the massive character of the structures (open cuts, concrete bridges, high-rise buildings) require equally massive action in the landscape, not small details or decorations. This environment is usually experienced from within a fast moving car or metro train, in just a few minutes. 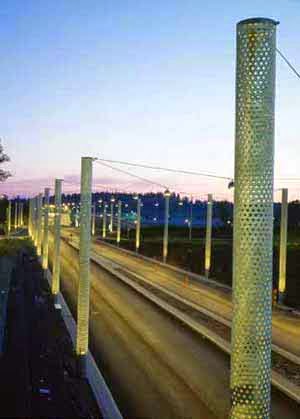 The fires in Vuosaari saved the town of Helsinki 50 years ago. They deceived the enemy bombers to drop their bombs in the wilderness of Vuosaari. In honor of this ingenious deception, there are now 132 light torches mounted on posts on both sides of the Vuosaari Road. The light posts, between which the actual road lightning fittings are suspended on wires, are made of perforated steel plate. Another luminaire is mounted at the foot of the post, and together with the perforated metal surface the light from this luminaire produces a moaree phenomenon: into a passing car the artificial light seems to glow like a flame. In daytime the row of posts and the wire roofing over the road create a uniform space, a tunnel through which the landscape is experienced. 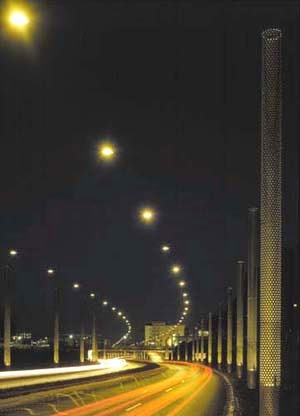