This last post of 2017 looks back at some highlights from this year: books I read and reviewed, exhibitions I saw, buildings I visited, and news I covered. I've tried to limit the list to a few in each category, and in some cases I've included one item from this year that I've yet to blog about but am looking forward to next year. It was a busy year for me – among other things, two books I wrote (100 Years, 100 Landscape Designs and How to Build a Skyscraper) came out – and therefore one with fewer posts than usual. Nevertheless, there are still plenty of good things to look back upon. 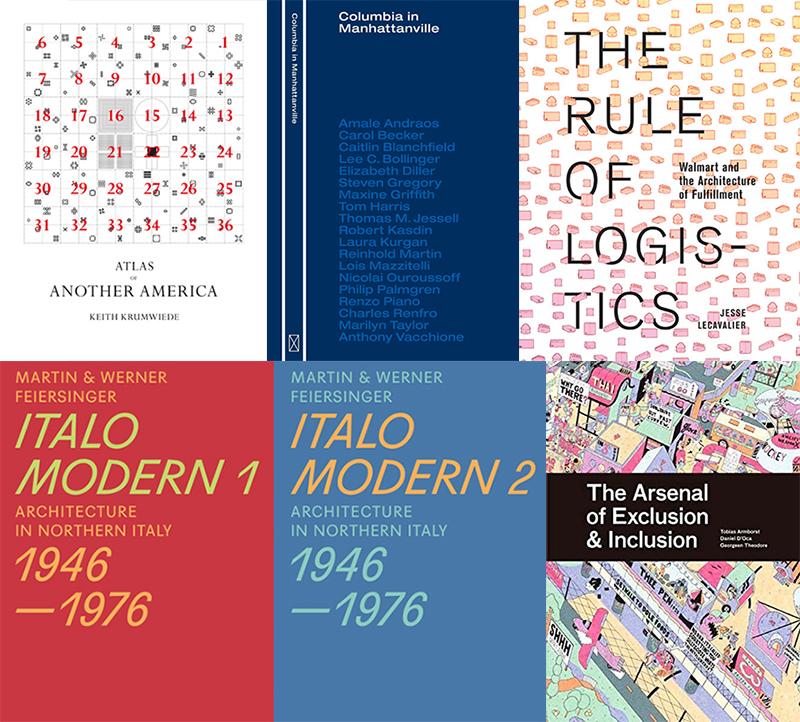 Easily the most unexpected and engrossing book I reviewed in 2017 is Keith Krumwiede's Atlas of Another America: An Architectural Fiction, published by Park Books. He combines architectural theory, old paintings, and, of all things, builder plans by the likes of the Toll Brothers into a poetic critique of the American way of living on the land. // One book I return to again and again (in part due to walking tours that encompass Columbia's new campus) is Columbia in Manhattanville, edited by Caitlin Blanchfield and published by Columbia Books on Architecture and the City. Its combination of history, criticism, photography, and voices of the architects and planners involved capture the myriad aspects of the contested project at the onset of its long realization. // Jesse LeCavalier's The Rule of Logistics: Walmart and the Architecture of Fulfillment took a fairly unappealing topic – logistics – and made it interesting by focusing on the largest retailer in the United States; my visit to Bentonville, Arkansas, to visit the Crystal Bridges Museum of American Art was colored in part by his analysis. // Martin and Werner Feiersigner's two-part ITALOMODERN: Architecture in Northern Italy 1946–1976 (Park Books) is a beautiful guide that made me realize how much great postwar Italian architecture I didn't know about – and now want to visit. // One book I'm looking forward to: Interboro's Arsenal of Exclusion and Inclusion (Actar), "an encyclopedia of 202 tools—or ...'weapons'—used by architects, planners, policy-makers, developers, real estate brokers, activists, and other urban actors in the United States use to restrict or increase access to urban space." 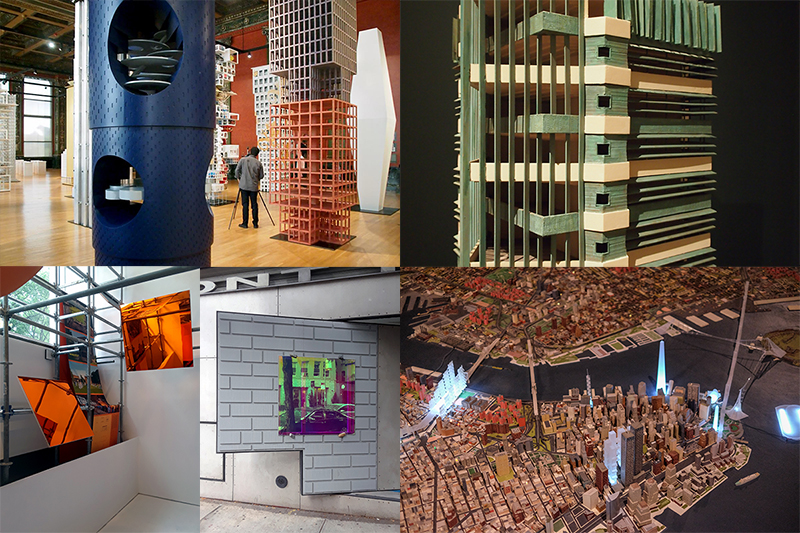 Four exhibitions stand out this year, ordered here from largest to smallest: By far the biggest – though not necessarily best, but impossible to ignore – exhibition I visited in 2017 was the Chicago Architecture Biennial, which wraps up January 8, 2018. I wrote about Sharon Johnstone and Mark Lee's Making New History for World-Architects, where I focused on the displays at the Chicago Cultural Center, the Biennial's main venue. // The Museum of Modern Art celebrated Frank Lloyd Wright's 150th birthday with a major exhibition curated by Barry Bergdoll. Frank Lloyd Wright at 150: Unpacking the Archive took deep looks at some lesser known creations by Wright, courtesy of a group of scholars and a museum conservator digging through MoMA's and Columbia University's joint Wright archive. (Like others, apparently I couldn't get enough of Wright in 2017: So You Want to Learn About Frank Lloyd Wright, Wright at Columbia, Book Briefs #31: A Trio of Wright.) // Scaffolding, curated by Greg Barton and designed by OMA's Shohei Shigematsu, took over the Center for Architecture in October. // For Souvenirs: New New York Icons, MOS Architects cut into the Storefront for Art and Architecture's iconic facade to create windows that gave peeks into the storefront space and acted as canvases for selfies. // I've yet to make it to the Queens Museum of Art for Never Built New York, but given all the good things I've read about it, and the fact it's open until February 18, 2018, that will be the first exhibition I'll see in the new year.

Ever since I folded A Weekly Dose of Architecture and moved its archive to this blog, I've left the posting of projects to other sites, such as ArchDaily and World-Architects. That doesn't mean I never blog about buildings; rather I focus on ones that I've actually visited. In 2017 I took a few trips: to Berlin, Northwest Arkansas, St. Louis, Zurich, and some places near New York City. Here are a handful of highlights. // Although Fay Jones's Cooper Chapel and Thorncrown Chapel were worth the trip, I knew so much about them that I had a good idea of what to expect. Another church closer to home surprised me a great deal, mainly because I did not know anything about it until about an hour before I got in the car to drive there: Victor Lundy's First Unitarian Church (1965) in Westport, Connecticut. Like the two chapels in Arkansas, Lundy's church beautifully situates parishioners in its forest context, but it also draws their attention heavenward through a central skylight and curved wood beams. // Another building (or more accurately, series of buildings) that integrates itself remarkably well into its setting is Kantonsschule Freudenberg in the Zurich's Enge district. Designed by Jacques Schader and completed in 1960, the educational complex was a joy to walk around – and inside, something I'm not used to doing given US security in schools. // Although I was disappointed by Dominique Perrault's Velodrome and Swimming Pool in Berlin, the city's Nordic Embassies, designed by Berger+Parkkinen and five other architects, held up to my high expectations. // Two St. Louis highlights: The lovingly restored Frank Lloyd Wright House in Ebsworth Park (1950s) in Kirkwood and Gyo Obata's Abbey of Saint Mary and Saint Louis (1960) in Creve Coeur. 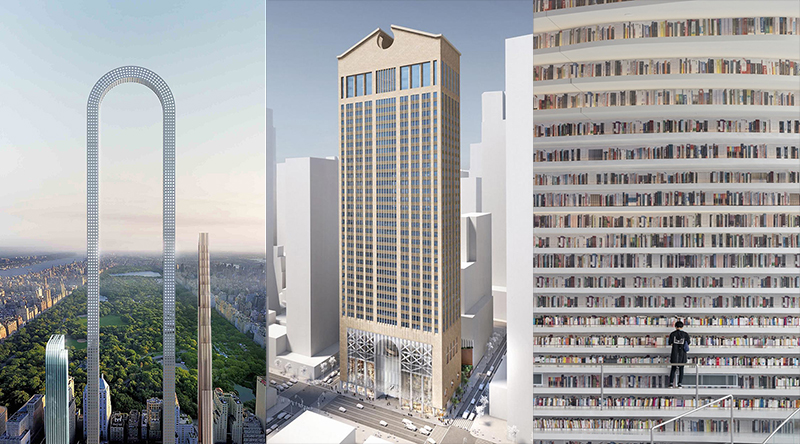 Although the three most clicked posts on this blog were my visit to Bronx Community College during OHNY and two Frank Lloyd Wright posts (linked above), the following three stories were up there pretty high, and for good reason: they embody the right amount of surprise and controversy that gets people like me to write about them in the first place. // Way back in March, oiio unveiled The Big Bend, a super-skinny supertall that makes the other super-skinny supertalls along 57th Street look stubby. I took it to be simply a critique, a provocation. But somebody I met at my book talk in the fall told me it is moving forward: surprising, but still hard to believe, given that two supertalls already occupy that block (is there any FAR left?) and word of its progress has not leaked to the press. I'm not holding my breath. // Two things happened in November: First, Snøhetta unveiled its designs for modifying the base of 550 Madison Avenue (aka Philip Johnson's AT&T Building from 1984), which immediately pissed of lots of architects. I took the opportunity to focus on the POPS (privately owned public spaces) and how they changed over the years, creating the need for Snøhetta's redesign. As of now, the PoMo icon is calendared for a Landmarks Preservation Commission hearing, meaning Snøhetta's plans might not happen as originally envisioned. // Outside of New York City, MVRDV completed the Tianjin Binhai Library, a cultural center featuring a "floor-to-ceiling bookcases cascade." Although I was surprised that nobody else seemed to be writing about the way most of the books are images of books rather than the real things, I still liked the idea ... until I learned that the library placed the books there temporarily since the space was not approved for book storage. So eventually the atrium will serve as a billboard for the items that are stored elsewhere in the building – assuming those books will remain.

With this post of 2017 highlights, I go on holiday break. Posts will resume in the New Year.
Email Post
Labels: book-favorites