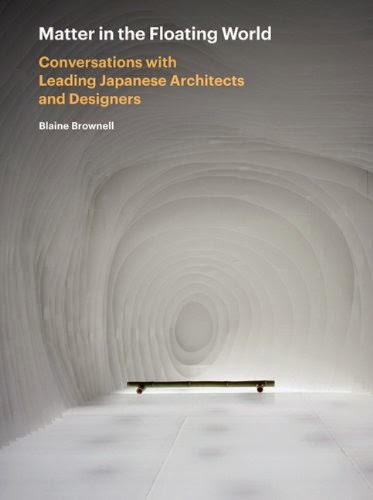 The arrival of this book in the mail happened not long before a 9.0-magnitude earthquake hit off the coast of Japan, sending a wall of water six miles inland on the eastern coast near Sendai. Fairly widespread thoughts of sympathy and calls for donations for residents of the area -- still dealing with the uncertainty of the nuclear reactors affected by the two natural disasters -- were followed in architectural circles by appreciation of the building culture in Japan, especially in terms of how earthquakes are addressed by new buildings. The oft-repeated video of a swaying skyscraper in Tokyo certainly looks scary, but that was what the building was designed to do; it moves with the horizontal forces instead of trying to resist them. This approach, admittedly in use in other parts of the world, gives a hint of the way designers of various ilk in Japan think, the way they problem solve and design for various factors. By the same token, Blaine Brownell's interviews with some of the most popular and prolific architects and designers from Japan illuminates the way they design, their unique blends of individuality and culture.

Brownell is known widely for Transmaterial, the online and print catalog of "materials that redefine our physical environment." His focus on material innovation, application, and sustainability informs much of the questions he levies at architects, such as Tadao Ando, Toyo Ito, Shigeru Ban, Kengo Kuma, and Kazuyo Sejima. There is a marked attempt at getting at how these and other architects articulate their intentions through their choices of materials and systems, how they innovate to achieve spaces and objects that, like the title attests, float between matter and idea. No better example can be found than the project on the cover, Kengo Kuma's Oribe Teahouse. Constructed from parallel ribs of white polycarbonate, the walls seem to dematerialize, giving a sense of space but not one that is tangible or well-defined. Not all examples in the book are so ethereal, yet it's hard to deny the ability of Japanese architects to pull off such amazing feats, what practitioners elsewhere yearn to accomplish.

The interviews are split into four sections: lightness, atmosphere, flow, and emergence. Brownell asserts that these "embody various approaches to materiality and evanescence in Japanese architecture and design," but in the case of the architects (I'll admit I skipped most of the designers in my review of the book, but it's clear from the illustrations that a variety of output and effects -- materials, clothing, lighting, products, etc. -- is explored in these) it's obvious that they could fit in other categories just as easily. Kuma is located in lightness, but the teahouse alone could move him to atmosphere. This is just one example, yet it starts to illustrate that these categories are not overbearing; they structure the book, but they don't impact how one reads it, at least not in my case. The interviews are full of personal and professional insight, carefully framed by Brownell's attentive questions. Highlights include Shigeru Ban, Terunobu Fujimori, Jun Aoki, and Toyo Ito.