This week's dose features two publications on Louis I. Kahn released in 2022: the revised and expanded second edition of Robert McCarter's monograph on Kahn; and a facsimile edition of one of the architect's first monographs, edited by Richard Saul Wurman and accompanied by a new reader's guide. Be sure to scroll all the way down for a list of other Kahn titles of interest. 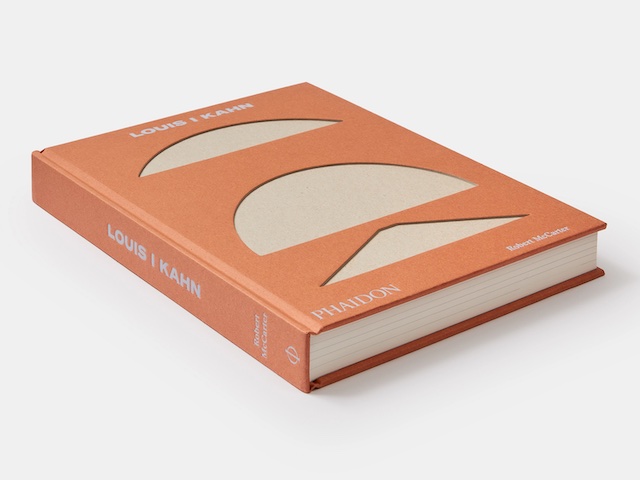 REVIEW:
According to his page on the website of the Sam Fox School of Design & Visual Arts at Washington University, architect Robert McCarter has authored around a dozen monographs, on architects both living and dead. Recent contemporary monographs feature WG Clark, Grafton Architects, Hermann Hertzberger, Steven Holl, and MacKay-Lyons Sweetapple Architects, while the historical monographs are devoted to Alvar Aalto, Marcel Breuer, Aldo van Eyck, Louis I. Kahn, Carlo Scarpa, and Frank Lloyd Wright. The monograph on Kahn was first published by Phaidon in 2005, but with the subsequent completion of the FDR Four Freedoms State Park on Roosevelt Island, the eponymous book has been expanded, enlarged, and updated. I have not seen McCarter's first book on Kahn, but I don't feel the need to search it out — the second edition is so good, in both its scholarship and its visual documentation, that it easily supplants the first edition. And if people plop down $150 on it, I'm sure they might be encouraged to feel the same way. This is not to say that McCarter's book is the definitive book on Kahn — no book can accomplish that, given Kahn's built output, poetic lectures, and dramatic personal life — but anyone looking for a comprehensive overview of his architecture will not be disappointed with this monograph. 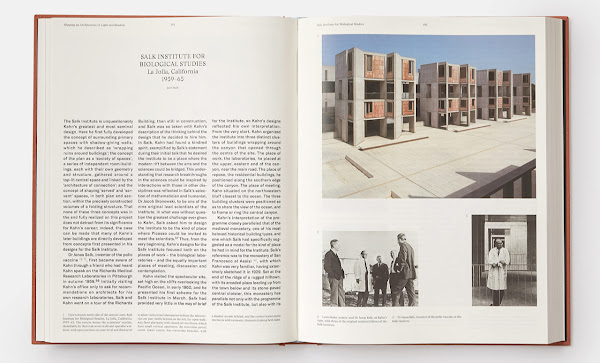 Comprehensive means just that: McCarter starts the book with Kahn's upbringing, education, and early work in the offices of other architects, giving as much attention to those decades than the ones that happened after his much-documented residency at the American Academy in Rome in 1951, when he traveled around the Mediterranean and "found himself as an architect," in McCarter's words. Still, the bulk of the book's half-dozen sections — with such titles as "Rediscovering an Architecture of Mass and Structure" and "Inspired Compositions in the Poetics of Action" — consist of case studies devoted to Kahn's masterpieces from the 1960s and 70s: the Salk, the Kimball, the Yale Center for British Art, etc. Alternating with subsections on themes in Kahn's work, where his residential projects tend to be discussed, the case studies of buildings and unbuilt projects (many of the latter are rendered by Kent Larson, author of Unbuilt Masterworks) are the most helpful parts of the book, especially for those most interested in the way Kahn's designs evolved over the course of a project; the visual documentation is especially important in showing how the designs changed in sometimes subtle and sometimes dramatic ways. Using the FDR Four Freedoms project as an example, McCarter's descriptions are heavy on formal descriptions but light on historical facts; the story of how the design was completed decades after Kahn's death in 1974, for instance, is relegated to a footnote, of which there are many in the back of the book. 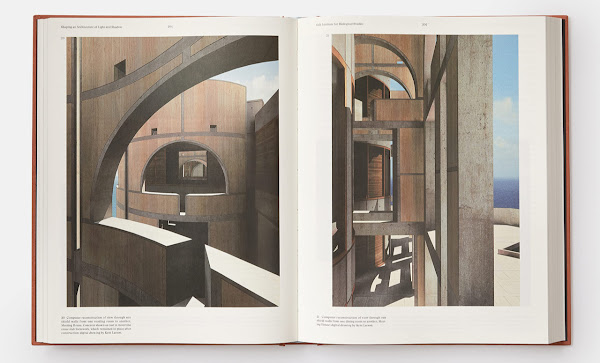 Holding the massive undertaking together are the beautiful construction of the book — from its large size and layered chip board cover to its paper selection — and the page design. In regards to the latter, a couple of things are worth pointing out: the images and captions are done well, with many of the images large on the page and all of them clearly numbered and keyed within the text. Second is the text itself, which moves in a subtle way from one-column to two-column and then three-column layouts across from subsection to subsection; the Salk Institute case study pictured above, for example, has a three-column layout, but the preceding subsection, "Wrapping Ruins Around Buildings," has one and the following subsection, which concludes the section of the book it is in, has two. This approach to text columns, which further organizes images and captions, is commendable, since Louis I. Kahn has a lot of text and the variation between subsections help keep the reader from being overwhelmed or bored with the text. Put another way, the design helps McCarter's text — readable but not exactly full of flair — go down a little easier. Of course, this monograph is hardly meant to be read cover to cover, but those who do will learn a great deal about the life, philosophy, and architecture of one of the most important architects of the 20th century. 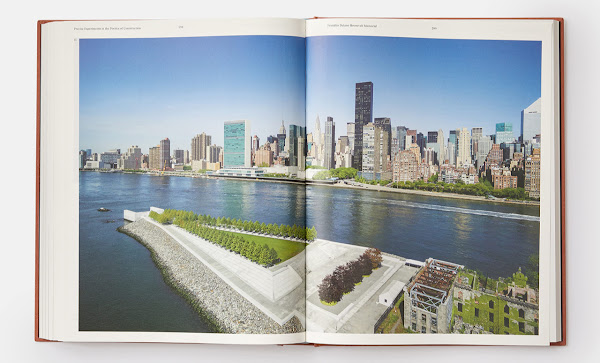 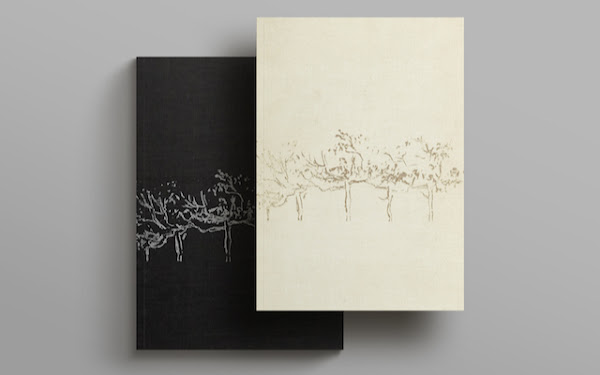 REVIEW:
The year 1962 saw the release of the first two books on architect Louis Kahn: Vincent Scully's slim, 128-page contribution to George Braziller's "Makers of Contemporary Architecture" series; and the large-format The Notebooks and Drawings of Louis I. Kahn compiled by Richard Saul Wurman and edited by him and publisher Eugene Feldman. Kahn had been working as an architect for more than 25 years by that point, but he really only had two notable completed buildings to his name by 1962: the Yale University Art Gallery (1953) and the Alfred Newton Richards Medical Research Building (1960). Although the latter was celebrated with an exhibition at MoMA in 1961, the two books were as much about the promise of Kahn's future architecture as they were about the buildings he had completed since his transformative trip to Europe in 1951. This promise is echoed by the two commissions he gained in 1962: the Indian Institute of Management in Ahmedabad and the Sher-e-Bangla Nagar, the second capital of Pakistan (later Bangladesh), both of which would occupy him for the remaining twelve years of his life. The year 1962 also saw the birth of Kahn's son, Nathanial, with Harriet Pattison. It was a busy year, to say the least, but also the beginning of one of the most fruitful stretches of building that could be attributed to one architect. 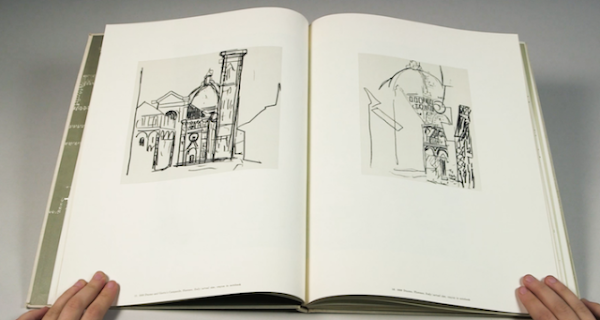 The above paragraph was sketched with the assistance of the helpful timeline on the website of the the Louis I. Kahn Facsimile Project, which was created by Designer & Books with the aim of reprinting the 1962 book by Wurman and Feldman and adding a companion reader's guide. Using Kickstarter to fund the endeavor (Designers & Books previously did the same with the Fortunato Depero’s 1927 book, Depero Futurista, aka "The Bolt Book"), the project was successfully funded last year, with Designers & Books eventually partnering with YC British Art to publish a reprint of the second edition from 1973 and a companion reader's guide with writings, interviews, and other new content. I have never had my hands on either the original Notebooks and Drawings or the 1973 edition, but I have no doubt that the Facsimile Edition is true to them. The distinctive stamped gold trees on the cover — extracted by Wurman from one of Kahn's sketches of the Yale University Art Gallery — are reproduced beautifully on the cream-colored linen cover. (The same image is embossed in silver on the paperback Reader's Guide.) Inside, the endpapers feature Kahn's famous movement pattern drawing for Philadelphia (1952-53) in reverse on green, while the heavyweight pages are off-white and light-green; combined with the many pages that exhibit the yellow of Kahn's trace-paper sketches, the whole has a earthy color palette gives the whole a cohesive appearance and almost archival feeling. 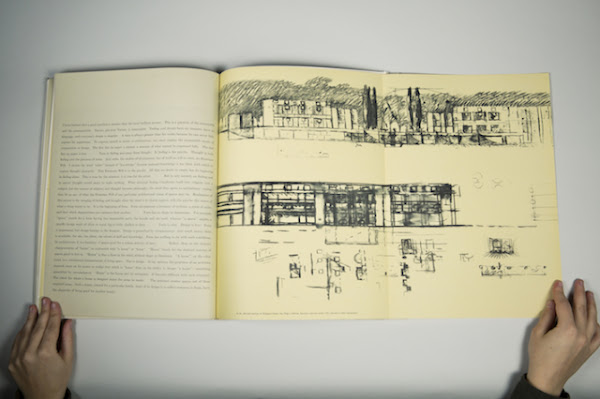 Last year, when Designers & Books was in the process of raising funds on Kickstarter, I spoke with Wurman about Kahn, his two books on Kahn (he also edited What Will Be Has Always Been, a compilation of Kahn's words, in 1986), and the facsimile project, editing together some of his words for a piece on World-Architects. Wurman has produced dozens of books in his lifetime, but he's never had any desire to reprint them, preferring instead to move onto the next project, to always move forward. So a reprint of Notebooks and Drawings had to have something new. As such, the Reader's Guide is an excellent addition to the Facsimile Edition, with background on the original book courtesy of an interview between Wurman and his biographer, Dan Klyn (Eugen Feldman died in 1975), and numerous contributions by family members (Sue Ann Kahn, Alexandra Tyng, Nathaniel Kahn), curators (William Whitaker, Peter Reed, Jochen Eisenbrand), critics and educators (Paul Goldberger, Hashim Sarkis, etc.), and others, including recipients of the Louis I. Kahn Award given out annually by the Philadelphia Center for Architecture. The Reader's Guide manages to situate readers in the timeframe of the original Notebooks and Drawings — through, for example, archival snippets from reviews of the book — but it also take them forward in time, to when the promise of Kahn in 1962 was realized in later buildings. Together, the Facsimile Edition and Reader's Guide are an integral addition to the library of any architect who wants better understand the architecture of Louis I. Kahn.